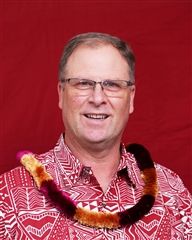 President, Maryknoll School
Perry K. Martin has served as President of Maryknoll School since July 1, 2008.
Mr. Martin completed his high school education at Corvallis High School in Corvallis, Oregon where he was a scholar athlete earning varsity letters in football, basketball, baseball and track. He attended Oregon College of Education (Now called Western Oregon State College), in Monmouth, Oregon from 1975 to 1979, completing his Bachelor’s Degree in Education. Oregon College of Education awarded him the title “Outstanding Person in Teacher Education” at graduation. He completed his Master’s Degree in Education and Computer Technology at Western Oregon State College in 1987. Mr. Martin holds a current Oregon teaching license and an Elementary and Secondary Administration License from The College of New Jersey. Mr. Martin holds the rank of Captain in the Civil Air Patrol.

Mr. Martin brings nearly 35 years of educational experience to Maryknoll School, including more than a decade of Catholic school administration and leadership. His noted accomplishments include Head of School at Maryknoll School, executing a highly successful on-going strategic plan and a 20-year master plan to advance academic performance and to transform the Maryknoll facilities. Mr. Martin also lead the re-creation of the Maryknoll Civil Air Patrol Program and was instrumental in creating the ENVOY Program and Chinese Immersion program. Mr. Martin has installed a leadership team who are creative visionaries, who set goals and execute the vision. He leads the largest Catholic School in Hawaii.

Prior to Maryknoll, he led Marist Catholic High School in Eugene, Oregon, which was recognized by The Oregonian as the top college prep high school in Oregon. He was also the past Principal of Sacred Heart Catholic School (K-8) in Medford, Oregon where he led school improvement to place Sacred Heart School in the top 10% of recognized private and Catholic Schools. His pastor, the Most Reverend Liam Cary was recently ordained Bishop of Eastern Oregon.
Mr. Martin has held multiple overseas education leadership positions in Dhahran and Ras Tanura (Saudi Arabia) while working with Saudi Arabian International Schools and Aramco Schools. During the initial stages of the first Gulf War he was asked to lead a task force with the Northern Area Aramco Vice President’s team to develop an evacuation plan for employees in the case of an invasion from Iraqi troops from Kuwait. As a civilian, he also housed and cared for four marines during the first Gulf War as facilities in Northern Saudi were initially scarce.
Mr. Martin is married to Leann Martin, from Salem Oregon, who is a certified teacher with over 25 years of Catholic Education experience. They have two children, Cassandra and Jameson, both born in Saudi Arabia. Mr. Martin has great respect for the history and traditions of Hawaii and Maryknoll School. He leads an excellent Maryknoll staff working together to develop 21st Century Learner, leaders, and citizens of character.
Back